The Library at Elsinore 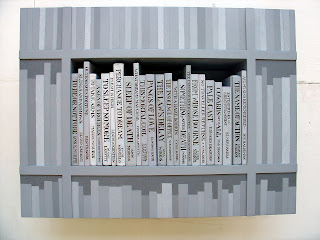 Shakespeare on a visit to the castle at Elsinore is to have an audience with the King. He is set to wait in its ample library for the summons into the royal presence. He finds himself alone there except for two rather overdressed courtiers who seem already to have been waiting for some time. He idly scans the shelves and takes down a book whose nicely ambiguous title, A Show of Violence, intrigues him. Its contents, however, seem of little interest. Replacing it he notices that the subsequent books on the shelf all have titles equally suggestive of emotion, escapade and death. So is it also on the shelves below. As if in a dream the titles conjure up, one after another, a sequence of speeches and events in a play.
As he reaches for the last book on the fifth shelf, Casual Slaughter, the door of the library opens. The courtiers look hopefully up but it is Shakespeare that the steward invites to follow him.
After his audience with the King, Shakespeare is returned to the library to await the coachman. He eagerly makes for the same shelves only to find that they contain a dull series of tracts and biblical commentaries...
Some such scenario or dumb show is the conceit behind a long planned installation, The Library at Elsinore, whose bookcase Andy has just finished constructing. I have been loading its shelves with the books I have prepared over the last few months and which have been lying in rows and piles around the studio.
Last year at the Ashmolean Museum I showed a maquette of a single shelf which contained all the titles (of actual books) that derive from Hamlet's speech, To be or not to be.....
Now the whole play is covered and next week as one of the hangers of the Summer Exhibition at the RA I hope to find a nice corner for it. 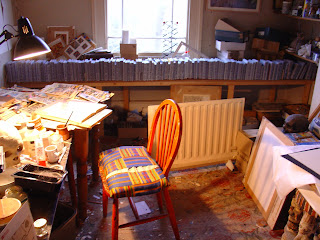 um. it's so... grey. and the books are so... similar. is this before or after? does it just get greyer and bigger?

Well, now that we have reached Empire Day congratulations are called for...
... not being British I confess I had no clue about Empire Day, but when I looked it up, I found out that it is a highly neglected day today - it isn't even a holiday anymore and there is no uniform observance worldwide.
This again links it to this other festive occasion. There might be no worldwide observance of the night porter's birthday, but wouldn't it be marvellous of one of Tom's own Union Jacks were flown - and how about commemorating this celebration by issuing a special TP-stamp (well, better not to join that special coin in his pocket though)?
Even though you won't get half the day off school: HAPPY BIRTHDAY, Tom!

Yes indeed, many happy returns (or: much lucky recursion, as one of my cards once said).

N.B. Kerstin, being British is no help with Empire Day -- you have to be very old to remember that (oops).