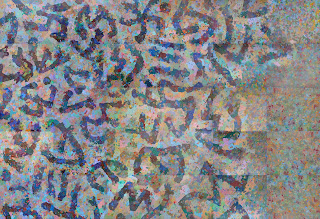 As at 4.8.08
The ritual of augmenting the sombre rosters of Terminal Greys is the most frequent in my working calendar. It contrasts with the longest cycle which is the annual round up of 20 Sites just completed by sorting the slides (what's a slide, mummy?) into a first and second set (i.e. the best and next best photograph of each site). The first set is that now kept by the South London Gallery and presented here on the website (www.tomphillips.co.uk). The second, its shadow, is lodged with the Tate Gallery archive. 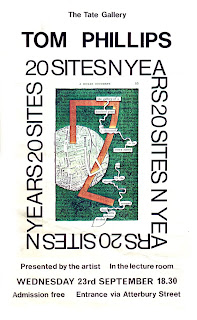 Quite early on (in the late seventies), as advertised in the above recyclable poster, the Tate started to host a lecture/performance by me of the piece as it progressed. This happened as the result of the support and enthusiasm of Richard Morphet and Simon Wilson, and continued biennially until 1995 by which time it involved the filling and refilling of many a perilous carousel in the projection room of the Clore Gallery. If the work should come into fashion again a lap top presentation (unimaginable in 1973) would be simplicity itself. 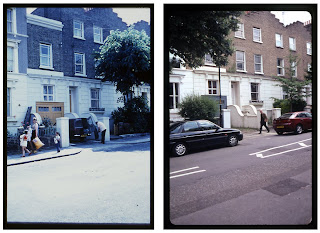 Here in 1973 and 2008 is site 3, my house in Talfourd Road, which is really a nest of studios which have gradually crowded out any sense of comfortable domesticity. The main studio, in which I am working on my painting, occupies the whole of the first floor. I am writing this in the nominal kitchen, an attic at the back overlooking a huge gingko tree which dominates the garden (a branch of which features in my portrait of Iris Murdoch). The smaller gingko seen here was planted in 1991 over my mother's ashes (for which, with the help of Jennifer Lee, I made a terracotta casket). This site alone features people I invite to appear rather than any random pedestrian. Here is Patrick Wildgust, friend, collaborator and currently the warden of Shandy Hall, passing by. His presence is appropriate since the house, in 2008, is acting as an outstation of Shandy Hall whose ghostly artist-in-residence I have mysteriously become. In this same kitchen I am at work on some new pages of A Humument to be shown at Shandy Hall in September (see events etc.). Patrick is, as it happens, in London today for the performance of Heart of Darkness at the Linbury Theatre of Covent Garden Opera House. This marks the end of a week of workshop sessions which have (opera swallows all) kept me from my painting and, more tragically, from the first two days of the Oval Test Match which in itself has been a ritual event in my life since 1948 when I witnessed Bradman's all too brief last test innings.
Posted by The Night Porter at 11:34 AM

I'll be thinking of you tonight. I do wish I could be there. Instead I am making apricot clafoutis with your step daughter!